If you can see this message then you are using a browser (probably Internet Explorer) which does not support the international web standards used by the LAS website and many others.
Click here for an example of how the site should look.

Please consider using an alternative browser - especially if you are on Windows XP which only supports the outdated Internet Explorer 8 browser - such as Mozilla Firefox or Google Chrome which do have support for these web standards. As well as not supporting modern features and web standards, old versions of browsers - especially Internet Explorer - can expose your computer to security risks. The Browse Happy website has a list of the latest versions of all major browsers, including Internet Explorer (but remember Windows XP only supports up to IE8!)

If updating/changing your browser is not possible, do not panic - all of the LAS website is still available to you and we are working to make the layout compatible with outdated browsers.

In the meantime, you will have to scroll down a way to see the page you wish to view. You can also skip past the moon phase info, etc. and click here after you've loaded a page to jump to the content.

We continue to monitor the COVID regulations and restrictions regarding reopening of Pex Hill and the restarting of events there and at other locations (e.g. the Quaker Meeting House, local parks, etc.)
Pex Hill will remain closed until the government COVID rules allow us to safely open up again. We currently have no events planned. Please monitor our website, Twitter and Facebook feeds for any future changes.
Please note that this includes all meetings at Pex Hill / Leighton Observatory.

THE NIGHT SKY DURING THE MONTH OF MARCH 2002

Will it be cloudy to-night?, ask the The U.K. Goverment Met Office Weather service.

The Night Sky as seen from Liverpool at any time, Click Here.

The Sun and Moon

All times are in Greenwich Mean Time (GMT) For Observer in Liverpool, Merseyside, England, U.K.

March 20th at 19h:03UTC marks the date of the Spring Equinox when the Sun crosses the celestial equator in Pisces heading North. March is also the month when the clocks are traditionally advanced by one hour in Britain to take us into British Summer Time (BST). As far as this page is concerned, you will have to added one hour to any times stated to obtain BST.

THE PLANETS THIS MONTH.

Mercury is not visible this month.

Venus is starting to increase its altitude as it moves through west towards the north. On the 15th Venus is 5° north of the Moon. 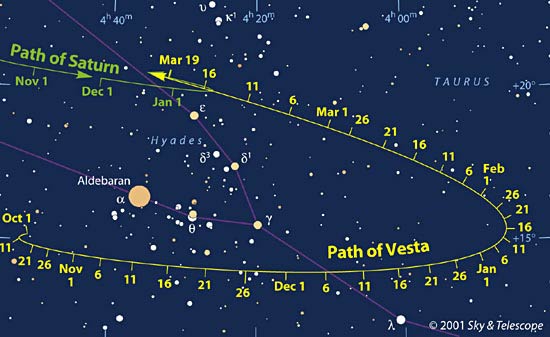 Sky chart: Path of Vesta (and Saturn) against the sky in 2002

4 Vesta is in close conjunction with Saturn, passing only 2′ south of the ringed planet on March 18th/19th. Both will be seen in the same eyepiece field, and looking like an extra outer Moon of Saturn.

Jupiter ends its retrograde motion in Gemini and starts to move from west to east again with the 1st quarter Moon passing a 18′ north at 10:40 on the 22nd. If you want to observe this event you will need a clear north-eastern horizon for the Moon will lie at an altitude of only 2°.5 in a Sunlit sky.

Launched in October 1989, the Galileo Jupiter Probe entered orbit around the great planet on December 7th 1995. The Project Galileo Homepage will give you up-to-date information and the very latest images returned.

Saturn lies in Taurus and it too has resumed normal west to east motion against the background stars. On the 5th Saturn lies 1° north of the naked eye star (epsilon) Tauri and on the 20th at 09h is 26′ north of the Moon.

Both outer planets are recovering from thier respective solar conjunctions, however unfavourable for observations at this time. It will be a few more months before they are easily seen.

Pluto can be found in Ophiuchus, below and to the right of 4.0 and 4.7 magnitude stars eta Ophiuchi and zeta Ophiuchi. The best time to look for the planet is when the Moon is not around. With this in mind the dates given below, calculated as either side of the New Moon, maybe used as a guide for planning an observing session.

Plus these pages will give daily and weekly reports of this and other Comets progress.